Recently Deutschlandfunk asked the violinist Patricia Kopatchinskaja (1,2) to write a letter to Beethoven. With her permission we reprint her letter here:

You titan and creator among men. We, the citizens of the free republics, have irrevocably cast you as the top of all monuments in our concert halls and on countless recordings. Kneeling before your music, we repeat it like a mantra. Oh you lighthouse that that blinds everyone!

You were feared, but in the meantime you have almost been played to death, wreathed with laurel, and safely placed in the cemetery of our glorious past.

Prometheus was the hope of your time, symbol of invention and of emancipation from the tyranny of church and kings, symbol of the rule of reason and human rights. It was Prometheus who stole the fire from the Gods and brought it down to earth. He was your hero.

We, the creatures made by Prometheus out of clay, we were so stupid and numb at first, but you brought us to Parnassus, where from the Muses and Apollo we learned music and dance, reason and insight. And Melpomene, the muse of tragedy, taught us how death ends people's days.


Do you want to know what has happened to us, to thy creatures of Prometheus? 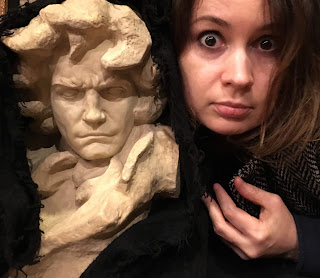 We were hardworking and fruitful and have procreated innumerably. We have used the reason taught to us to use your fire for warmth, force, comfort and the affluence of modern times. Nothing is enough. Nature is strangled. Nor is our reason sufficient to follow the insight that fire continues to give birth to fire, from California, Australia, Siberia, up into the Arctic, until fire will end the hopes and days of mankind.

And we finally have to realise that Prometheus and we, his creatures who thought that we did not have to respect Zeus, we were not gods. And was the bringer of fire really the titan Prometheus or was it not rather a creature from hell - Lucifer?

And now, if you allow for some background:

Johann Wolfgang von Goethe wrote the poem "Prometheus" between 1772 and 1774, then being in his early twenties. This poem sums up the hope of an epoch: Prometheus the revolutionary titan disregards the gods by taking his fate in his own hands and by creating mankind after his own independent image, leaving Zeus and the gods behind as supposedly irrelevant footnotes to history.

Here is the immortal recitation by Alexander Moissi (in German, 1912):

And here the poem in English:

Prometheus
Cover your heaven, Zeus,
With cloudy vapours,
And test your strength, like a boy
Beheading thistles,
On oaks and mountain peaks;
Yet you must leave
My earth alone,
And my hut you did not build,
And my hearth,
Whose fire
You envy me.
I know nothing more paltry
Beneath the sun than you, gods!
Meagrely you nourish
Your majesty
On levied offerings
And the breath of prayer,
And would starve, were
Not children and beggars
Optimistic fools.
When I was a child,
Not knowing which way to turn,
I raise my misguided eyes
To the sun, as if above it there were
An ear to hear my lament,
A heart like mine,
To pity me in my anguish.
Who helped me
Withstand the Titans’ insolence?
Who saved me from death
And slavery?
Did you not accomplish all this yourself,
Sacred glowing heart?
And did you not – young, innocent,
Deceived – glow with gratitude for your deliverance
To that slumber in the skies?
I honour you? Why?
Did you ever soothe the anguish
That weighed me down?
Did you ever dry my tears
When I was terrified?
Was I not forged into manhood
By all-powerful Time
And everlasting Fate,
My masters and yours?
Did you suppose
I should hate life,
Flee into the wilderness,
Because not all
My blossoming dreams bore fruit?
Here I sit, making men
In my own image,
A race that shall be like me,
That shall suffer, weep,
Know joy and delight,
And ignore you
As I do!
(Translation by Richard Stokes, author of The Book of Lieder, Faber, 2005)

Soon afterwards came the French Revolution. Its first Consul - Napoleon Buonaparte - was then considered by many as the New Prometheus who by creating modern laws led mankind out of serfdom under kings and church into an emancipated future.

It was then that Beethoven wrote the music for the Ballet "The creatures of Prometheus" (1801) which put such ideas on stage in the form outlined by Patricias letter. Material from this music would reappear in all his symphonies, especially in the Eroica (1802-03) originally dedicated to Buonaparte. However, when Napoleon immodestly crowned himself to be emperor (1804) Beethoven erased his handwritten dedication from the manuscript. But one still can understand the Eroica as a sort of Promethean symphony. And the whole work of Beethoven up to his ninth symphony sums up his (and our) hope for an enlightened and humanistic world.

And now a quarter of a millenium after Beethovens birthday there reigns unanimous and unending exuberance of praise, affirming and confirming Beethovens towering greatness for humankind and humanity, the whole being also somehow selfgratulatory for our own human progress made under the Beethovenian ideals. But while much of this praise may be justified there remains some scepticism and even sorrow, e.g. there are some doubts concerning the nature of Prometheus  as discussed by Wreblowski (3). With the benefit of hindsight Patricia felt compelled to articulate these concerns in her letter.