Different Reactions to Coronavirus and Climate Crisis: A Question of Age Group?

Prompt response to an epidemic

So far (June 2020), the coronavirus has killed about as many people in five months as the global traffic does regularly in the same time. Only in the worst case will the epidemic last two years and the order of magnitude of the killed will be comparable to the numbers of road accidents for some time. In contrast to the traffic fatalities, the corona dead will be mainly old people with previous illnesses who would have blessed the time anyway in a foreseeable future. In addition, there will be collateral damage other sick people not being adequately treated because of clogged intensive care units. The economy will suffer a severe dent, after which the world will return to the order of the day, just like after the flu epidemic of 1918 or after the financial crisis. Pension funds will suffer financial losses, but will be somewhat relieved by over-mortality of pensioners. The problem of overpopulation remains unaffected.

The public and the media only needed a few weeks to months to understand the problem. Everywhere the scientists were given a platform, and depending on the level of information, competence and courage of the decision-makers, the political reaction came more or less quickly, not everywhere in time or quite adequately, but finally reaching impressive proportions almost everywhere.

An estimated quarter of media content is concerned with this problem. All possible scenarios are expanded and discussed at a high level. The existing basic consensus is only disturbed by some trolls and a few self-proclaimed pseudoexperts, neither of whom are taken seriously by serious media.

And despite all this agitation, the coronavirus epidemic will be history by 2022 at the latest. So what?

Inadequate response to the environmental crisis

Let us compare the reaction to the climate and environmental catastrophe: overpopulation and overconsumption blow up the foundations of life. Space for nonhuman creatures is rapidly disappearing due to overuse and to loss and poisoning of habitats. Damaged ecosystems and monocultures are sensitive to new plagues. An increase in temperature due to greenhouse gases was predicted by James Hansen back in 1988 and his predictions have turned out accurate up to now. The consequences such as floods, droughts, hunger, wars and migration are already apparent.

But even decades later, the public, the media and politics have not understood what will come. Science has been neutralized in the government-dependent Intergovernmental Panel on Climate Change (IPCC) which hardly mentions the match-determining feedback mechanisms, which can double the officially predicted temperature rise or even accelerate it uncontrollably at any time. Anyone who, like the tried and tested expert James Hansen, still speaks out what's going on (Climate Change in a Nutshell - The gathering storm ") is ignored or taken away by the police (picture). 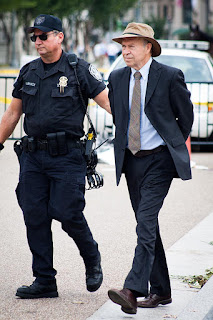 And even as far as science has its say, it is drowned in a flood of climate-nonsense. Even so-called "reputable" media denigrate scientists as "alarmist" and their reasoned proposals as "extreme". The result is a lack of political response disguised by declarations such as the Paris Agreement which has not even been able to stop the absurd billion dollar subsidies for the fossil industry.

Why the different reaction?

The coronavirus epidemic is receiving a huge and quite efficient media and political response, even though it doesn't really threaten anyone except the very old. The environmental and climate crisis, on the other hand, receives only a small, trivializing and completely inefficient media and political reaction, although in the coming decades or even years it will most certainly threaten the existence of our civilization, that of humanity and of large parts of the biosphere.

Where can this grotesque discrepancy come from? With the older people, the corona virus threatens exactly the age group that actually leads society, sitting in suits and ties on boards of directors and governments. They have the leverage to get the media, politics and society to defend their old lives and interests and they certainly use it.

In contrast, the environmental and climate crisis is sparing these same older decision-makers, because they are likely to die before the problems become acute. Therefore, the most comfortable thing for them is "business as usual" and the sufferers - the young generation - have little leverage to defend themselves, except repeating the “alarmist” and “extreme” teachings of science in impotent protests.

Some other posts in English: 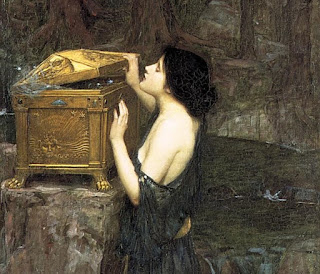