What is new is that everything accelerates: the ice melts faster than predicted. Its lack of reflection increases CO2-related warming by 20 or more percent (1). The sea warms up faster and rises faster (2) than predicted. Greenhouse gases continue to rise, global warming accelerates and the fatal self-boosting feedbacks by methane release and large-scale forest fires have only begun. Since spring 2019 hundreds of temperature records have been broken and we had the warmest months of January, Mai, June and July ever. We notice it ourselves: The summers get mercilessly warmer and warmer.


The four apocalyptic horsemen are: Global Warming (3), which is occurring up to a hundred times faster than earlier warmings. The lack of water (4), which threatens one fourth of humanity. Species extinction (5) due to wasting and poisoning of habitats. And last but not least overpopulation (6), the root cause, which continues to increase. Each of these factors can be fatal on its own and they reinforce each other. E.g. the co-director of the Potsdam Institute of Climate Research Johan Rockström, an expert on the limits of the planet said that with global warming of 4 degrees (which is possible before 2100) he has difficulty to see how the earth could nourish eight billion of people or even half of that (7). And what will happen to the rest? 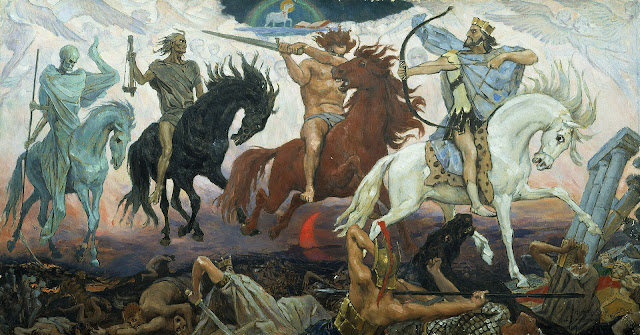 Many call for action, and many clash with those who deny the problems. But does that make sense? Is there any escape from this fourfold overkill?

For example, the American Roy Scranton experienced terror and state collapse as a soldier in the Iraq war. Back in the US, it dawned upon him that the same fate awaited the developed nations. He concluded that, just as the soldier must learn to die, in the Anthropocene we also have to learn to die, not just as individuals, but as a collective (8).

Three personal experiences reinforce my concern: Prof. Jphn Schellnhuber, the most prominent German climatologist omnipresent in the media who in public exudes a mild, solution-oriented optimism told us already 2017 in private that he no longer sees any way out of this trap for humanity.

And about 1973, that is shortly after the first report of the Club of Rome, I had a vivid dream. I stood on the edge of a medium-sized gravel pit, which was partially restored, that is, renatured. Down there among bushes, maybe a hundred yards away, was a small group of nude, quite green people, about three in number, mostly grownups, but not old. They did not notice me and said to each other "We are the last human beings". I felt that this was a meaningful, a so-called "big" dream, but rationally could not do much with it, and at best hypothetically linked it to the environmental situation. But after all, C.G. Jung used to quote a rabbi who had written: "The dream is its interpretation"...

My father, Markus Eduard Fierz (1912-2006), was a theoretical physicist "of the first hour", who knew Pauli, Bohr, Heisenberg, Einstein, and worked and taught in Basel, Princeton, CERN and ETH. He had great intuition and was a virtuoso at so-called Fermi estimates, the estimation of sizes from inadequate information (The famous Fermi question was: "How many piano tuners are there in Chicago?"). Later in life he became very concerned about the environment and predicted a general ecological collapse starting around 2020 saying that of course it was not possible to predict the year exactly, but once it started it would go downhill very quickly for mathematical-physical reasons. After failing to understand both dream and father for decades and years, I now realize both could end up being right.

I found the content and fate of an article (11) by Prof.Jem Bendell, the English university teacher of sustainability revealing: Based on a large literature review he argues that the environmental situation is out of control and irreversible. Already in the next decade, one would have to reckon with great crises, even with the beginning of the dissolution of civilization. This article was not accepted by a journal because it does not cite enough scholarly literature on collapse of civilisation (there is almost none) and because it could scare the readership.

Bendell, fed up with this academic correctness, published the article on the web, where it has been downloaded half a million times and translated into several languages. There, and in an interview with climatologist Wolfgang Knorr (12), he comes to the conclusion that even the scientists do not truthfully inform the public: All the reports of the International Panel on Climate Change (IPCC) up to 2020, written under the pressure of oil-producing nations, neglected the acceleration of global warming caused by multiple positive feedbacks. Therefore they are consistently too optimistic. To quote Bendell and Knorr: “Science is letting down humanity”.

In fact, the disaster perspective is concealed by everybody: Although scientists and some media have been warning us for fifty years, this happens regularly only in a piecemeal way, carefully and objectively weighed. Somebody is talking about dwindling glaciers, somebody else about the future of winter sports, someone dwells on insect extinction, another one is studying bees, there is talk about poison in rivers, or warnings about the temperatures in the cities, others are considering crop failures or exploring reasons for migration. They have the pieces in their hand, but, alas, lack the mental bond for the realization that it all comes down to a self-reinforcing global catastrophe. And therefore there is no urgent reference to our own destiny and the necessary alarm is not sounded. The only point the scientific community always agrees upon is the demand for further research and more money, which the politicians are only too happy to grant if only they can remain inactive.

Are the scientists afraid of their own courage? Are they afraid of loss of public esteem and public money, do they fear loss of media coverage, loss of reputation among colleagues when they talk the plain talk that would be appropriate, although it would hurt?

For a long time it was a mystery to me how even some of the most clever and highly educated politicians could claim that climate science is wrong. While writing this text I've come up with something: In my practical work as a doctor, I learned that one is almost always believed if one speaks up clearly, bluntly and directly. Could it be that such sceptics feel indistinctly but rightly that something is wrong with the scientific information and the IPCC reports, and that is why they do not believe them? To me this does not seem impossible.

We find this fragmented approach not only among scientists, but also among the worried and the Greens. These preach well-meant individual measures such as vegetarianism and renouncing plastic bags, but often fail to mention that this is never enough – they do not want to scare the voters after all. Only children and fools tell the truth and lead desperate crusades...

All of them are ignoring the population issue, but they are anyway overruled by the dull majorities that vote Trump, Bolsonaro, and Morrison into office, those politicians who basically already announce the end of civilization. Between these political poles lie the "healthy" middle of mindless consumer citizens, and the media, which question facts as opinions, as well as the jellyfish-like politicians who navigate according to the latest surveys. The result is an immobile crowd waiting in anesthetized wellness for disaster, like Christmas turkeys on their turkey farm. A physician managing a critical situation with such indifference would end up in court and jail for malpractice.

What is coming can already be seen in the Middle East with heat, drought, hunger, state disintegration, tyranny, epidemics, war and mass migration. This will gradually spread to other regions and to us. Particularly susceptible are complex systems such as large cities, major distributors, high culture, monetary value, banks, the financial casino, long-distance transport, old-age provision or legal security. The talk of human rights and climate justice will be left behind as mockery. We are caught in a suicidal culture and will perish with it.

Meanwhile, even the Secretary-General of the UN warns that we have only until 2020 to avoid the tipping point of the situation (13). And yet there is hardly any reaction. Protesters are imprisoned or expelled from the country. Therefore the next question arises: If we do not want to or cannot save ourselves, what then?

It means then the end of many nations, of many cultures, of human values (Menschlichkeit) in many places, of very many human beings and large parts of the living world, perhaps of humanity as a whole. Many old people are concerned with their individual end. In the Middle Ages, there was even the art of dying (Ars Moriendi), which prepared adepts for a good death and for the four last things - Death, Judgment, Heaven or Hell. But after all, mortals could console themselves with descendants, who continued their ideals, their skills, their culture and their genes. The death of civilization lacks this comfort. But somehow we have to translate the knowledge about the death of the individual into one about our collective dying. 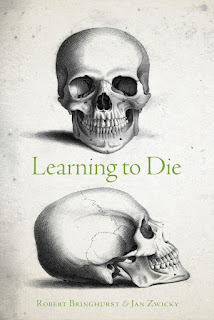 Robert Bringhurst and his partner Jan Zwicky, two Canadian scientists, philosophers and poets, in their booklet "Learning to die - Wisdom in the Age of Climate Crisis" (14), believe that, even if a few people should survive the sixth mass extinction, our civilisation will not. And then nobody will know anymore about Plato, Bach or Rembrandt.

Bringhurst writes knowledgeable books about the myths and cultures of Native Americans (15). He describes how these natives understood themselves as part of a nature that cannot be dominated. This in contrast to the Western attitude that nature should be dominated as expressed in Genesis 1:28 "Be fruitful, and multiply, and replenish the earth, and subdue it: and have dominion over the fish of the sea, and over the fowl of the air, and over every living thing that moveth upon the earth...", the attitude that is actually the cause of our predicament.

Zwicky asks what moral qualities we need at the end of our civilization. These are the qualities that have always been needed in life: knowledge and the awareness that our knowledge is limited, modesty, courage, self-control, justice, patience and mercy. Only with modesty can we get rid of the ego, which gives us the courage to look the facts into the eye. And compassion is needed for those who cannot face the facts. In any case, our own actions and those of others are but gestures in the air that disappear like music. Like the previous mass extinctions, the present one will leave some life behind which will give rise to other forms of life.

These highlights must suffice, but this booklet shows that you can view the whole problem quite otherwise than with rejection, panic, schedules for action or a raised index finger, namely with philosophical composure.

If the end of life of an individual is inevitable and consists only of suffering, whose meaning is difficult to see, then the question of euthanasia arises, and indeed it is sometimes practiced today. This question will also arise when societies perish in hunger, disease, plunder and mutual manslaughter. The idea is not new. In the end-time novel "On the Beach" (1957, 16), Nevil Shute lets the last survivors of nuclear war kill themselves with cyanide to escape these final stages.

It's also about how to shape the last hours: When the children of the orphanage run by Janusz Korczak (17) had to leave the Warsaw Ghetto, he tricked them into believing they were going on a countryside trip and dressed them as nicely as possible. Korczak went along and preceding the procession of twohundred children a boy played the violin - the Germans love music. Holding their little hands, adorned and singing, they moved to the cattle cars, which were to unload them in Treblinka for immediate gassing. Le style c'est l'homme.