What matters in Climate politics - An update for COP26

My book "Begegnungen mit dem Leibhaftigen" (2016) will be translated into Dutch. So I had to update the postscript of the chapter "White man doomed" which was outdated. Updated on Nov.16. 2021.

Greenhouse gases have been rising relentlessly and faster and faster for decades (for CO2 google “Keeling Curve”, first hit). Correspondingly, the measured heating goes faster and faster. That is all that matters, and climate policy has not changed anything about this. 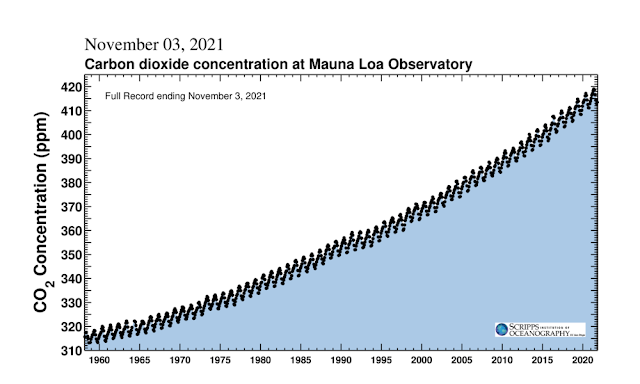 In 2015 we still believed that the Paris Agreement would limit global warming to 1.5 degrees by 2100. An early objection came from James Hansen, who had predicted the expected warming and its consequences quite accurately in 1981 and then ascertained it in 1988. Hansen describes the large-scale removal of huge amounts of CO2 from the atmosphere required by the Paris Agreement as illusory. According to him earth history shows that the self-reinforcing mechanisms will be match-deciding and in his view the agreement is a "fake".

Since then also the IPCC has begun to talk about self-reinforcing mechanisms and the 1.5 degrees will probably come by about 2030 (1) - a move forward of 70 years in less than seven years! Many official predictions were too optimistic, e.g. the arctic ice is melting faster and the permafrost is thawing faster than previously predicted. Meanwhile the hotter climate has led to vicious weather changes with heat waves, storms and floods, large-scale forest fires in the far north and water shortages and droughts. The wars and migrations in the Middle East, East Africa and Central America are already largely caused by global warming. The thawing permafrost releases additional CO2 and methane into the atmosphere (methane also comes from livestock farming, rice cultivation and the extraction of fossil fuels). Methane is up to 80 times stronger than CO2 and already accounts for a third of the greenhouse effect.

We are in the midst of the greatest extinction of species since the dinosaur era: At first it was independent of the climate through hunting (big game, whales, fish), then through the expansion of settlements and farmland with the use of monocultures, fertilizers and poisons. Not only animals, but also at least a third of the 60,000 tree species are threatened with extinction, especially through logging, clearing and overgrazing and increasingly also through drought and fires. As a physician I know that first symptoms often do not indicate the beginning of an illness, but rather the beginning of the end: Smokers or drinkers need decades before shortness of breath or jaundice occurs because lungs and liver can compensate for a long time. When symptoms appear, the organs are already 80 percent destroyed and survival has to be measured rather in years than in decades. Accordingly, the visible withering away of nature is probably not a beginning, but also a beginning of the end. Incidentally, men in industrialized nations have fewer and fewer sperm, probably due to environmental toxins and to softening agents in plastic packaging and bottles, which also cause disturbances in gender differentiation.

According to the UN forecast, we are on the way to a 2.7 degree global temperature increase by 2100. Overland that means almost twice as much. And accounting for possible self-reinforcement mechanisms, it can also become 3 or 4 degrees Celsius, or more. Some scientists such as Prof. Peter Wadhams, Arctic researcher and emeritus professor of physics at Cambridge University, also believe that the Arctic release of CO2 and methane could lead to an acute acceleration in warming. If the climate catastrophe in 2015 still seemed  generations away, it now seems more a question of decades or, in the worst case, years.

The general public, media, parties and governments obscure the view with declarations of intent, with plans and success reports on qualitative and sustainable growth, energy-saving measures, alternative energies and e-mobility, but ignore the only criterion that matters: the mercilessly increasing greenhouse gases. In forty years it has not been possible to introduce the two most obvious measures, namely to end the billions in subsidies for the fossil industry, let alone to tax the emitted CO2 effectively. Both would be perfectly compatible with a market economy and even with conservative views. But now far more drastic measures are needed, and the braking distance will be overly long for them too.

When the temperature rises above 2 degrees, coasts and coastal cities begin to drown, trees and forests die extensively, deserts grow. Drought and the death of insects and bees stifle harvests. Problems with drinking water, food, raw materials, energy and security will first damage the most complex systems, such as world trade, monetary value, the financial casino, the insurance industry, the service society and big cities. Democracy, the rule of law, climate justice and human rights will give way to state failure, gang economies, migrations of peoples and wars. All this has already begun in many places of the earth  With a global warming of 4 degrees, the earth will perhaps only feed half half of the current world population. Local subsistence farming in cooler and inaccessible areas will last somewhat longer, but the endpoint will be an uninhabitable earth.

So the Indian chief could be right who said that the white man will perish, with civilization, the rest of humanity and half of God's creation. Perhaps one should no longer be concerned with measures, but rather with the right attitude towards death.

But then, the question arises how this lemming-like blind run into death could come about. Here are a few remarks:

Since vaccinations and antibiotics, death is no longer an omnipresent part of life and it is often suppressed from consciousness. Elisabeth Kübler-Ross has described what happens when death intrudes into life, e.g. as cancer or some other fatal disease. The parallels to the reaction to the fatal climate catastrophe are striking: First comes denial - if you cannot see death, you cannot perceive the fatal danger. Hence the harmless expression "climate change" instead of "self-immolation". After repression comes anger with fate: The messenger is attacked, be it the doctor or Greta Thunberg. Then comes the bargaining with fate, you try alternative cures and charlatans, or believe in environmentally friendly growth and e-mobility. The insight that this doesn't help either is followed by depression, which we find in exactly the same form in the seriously ill and in the environmentally conscious. Finally in the best case there will acceptance of fate. When it comes to climate catastrophe, the majority is still denying, angry or bargaining.

It is not just the messengers, also the politicians serve as scapegoats. But at least in the democracies they are elected. And in Switzerland everything is decided by the people anyway: In the summer of 2021, the Swiss people rejected a mild CO2 taxation in a general vote, and initiatives against pesticides and against drinking water poisoning were also rejected. Theefore in our beautiful country you burn and poison yourself voluntarily out of free will and decision, there are no scapegoats. And so, like everyone else, we sit in our growth- and consumer society, narcotized by prosperity and know as little of the approaching end as the happily well-fed turkeys and geese before Thanksgiving and Christmas.

The accused politicians and rulers want to stay in the saddle and that's why they sweep problems under the carpet anytime and anywhere. When James Hansen from NASA alerted the world and government officials about the climate problem from 1981 onwards, he was warned to desist and his funds were cut. The Intergovernmental Panel on Climate Change wrote and writes its reports under political pressure from the oil and coal-mining countries, which is why it predicts optimistic mean values ​​while ignoring the more concerning extreme risks. Just recently, the IPCC predicted the 1.5 degrees for 2040, but "forgot" that greenhouse gases would continue to rise. If that is included, the 1.5 degrees will come as early as 2030 (1).

Physicians have to deal with risks in a realistic way: Patients bleeding from the rectum almost always only have harmless hemorrhoids. But this statistical mean doesn't mean anything. If the doctor misses the few percent with colon cancer, this is a malpractice case for the courts. Accordingly, a doctor must always be prepared for the worst possible variants. Since the optimistic assumptions of climate policy are constantly proving to be wrong, those responsible would belong in court if we were to apply the standards of medicine.

The response to COVID was rapid and decisive around the world, flights and cruises were immediately  banned. Why is this only being done for COVID and not for the climate? Because the decision-makers are predominantly older men for whom COVID is dangerous. As long as there was no vaccination, they protected themselves with lockdowns. But if they think that they will not be affected by the climate catastrophe they might be in for bad surprises. In the meantime the thinking youth is organizing the protests that thinking adults have not been capable of for 40 years. Accordingly, the majorities will soon change, the only question is whether there will still be enough time.

A finite planet only has space for a limited number of people, everything else is an infantile omnipotence fantasy. Early warnings from Malthus (1798) and from Paul Ehrlich (The population bomb, 1968) turned out to be unfounded for the time being because of the technical and green revolutions. The 1972 report "Limits to Growth" by the Club of Rome saw the sustainable upper limit of the world population at four billion. The book is often misquoted to refute it. But a shortage of resources or agricultural production from 2000 onwards was never predicted there, it was left open. The firm prediction, however, was that further growth would lead to a collapse towards the middle of the 21th century, with a decline in production and population, the critical factor being pollution. The greenhouse effect of CO2 was also mentioned, and it turns out that it now seems to be the limiting pollution factor.

What should be done

Wind turbines, e-mobility, nuclear energy or veganism have so far not changed anything about the increase in CO2. Everything can be discussed, but individual measures are in no case sufficient. Even a “system change” or expropriation of the “rich” cannot replace an overall package that reduces our consumption or our numbers, or both. Elements for this would be: Optimally insulated houses, timber construction, low-traffic settlements, efficient public transport with massively restricted motorized private traffic, avoidance of flights, predominantly vegetarian and locally produced food, less consumption of everything, including hot water, water and clothes, plus removal of CO2 from the atmosphere as possible. Less production also means less working time. With all of this it would be possible to massively reduce energy consumption even with today's population and to cover it almost entirely with renewable sources (2), albeit with a lifestyle so modest that it seems improbable that democracies will be able to impose it on themselves.

But this would not even influence species extinction. To prevent it we would have to leave half of the earth to nature in the opinion of the famous insect scientist E.O.Wilson. And that would probably not work without a population reduction.

It was always a mystery to me personally why population numbers and population increase should not be negotiable. The planet and we would have been better off with a world population of one or two billion people. This  now would take generations of voluntary one-child families (if environmental toxins do not curb our fertility before). If we don't get the curve, the environmental catastrophe will decimate or exterminate us. Would that be more ethical and wiser?